During a routine lifting operation from quayside to vessel, whilst attempting to lower a pallet laden with stores through a deck hatch, the load contacted the corner of the hatch, damaging the pallet and caused the majority of the 902kg contents to fall 7.2m to the deck area below. Although the pallet contained multiple items the individual weights of the goods dropped were significant; had a person been under the load and struck by a falling item the result may have been a fatality.

No-one was harmed during the incident, however the storeman was in the line of fire when receiving the load at the designated landing site. The storeman ran from the area and slipped on cooking oil which had spilled from the damaged supplies, causing him to fall to the deck onto his hands and knees.

Prior to the lifting operation, personnel responsibilities had not been adequately established at the tool box talk (TBT) and a number of crew members had arrived on the worksite late, failing to attend the TBT. This resulted in confusion as to who was responsible for the load at each point during the lift.

In preparation for the lift, and unlike the previous loads, the bosun neglected to utilise the load securing chain on the pallet lifting frame. This oversight had been noticed by the crane operator but went unchallenged as the crane operator felt it was his supervisor’s responsibility and did not want to challenge his superior’s action.

On lowering the pallet into the stores hatch the crane operator was expecting instructions from the banksman, who conversely believed that the crane operator had control at this stage. Because of the incorrect understanding and lack of control from the banksman, the load was lowered into the blind hole in one slewing motion and not in a staged progression, this did not allow for the load to be stabilised and centralised prior to lowering through the hatch. The risk assessment did not make reference to the practice of a staged progression.

As a result of the above, the load had a sufficient degree of freedom to contact the side of the hatch and damage the pallet, resulting in the contents dropping to the deck below. 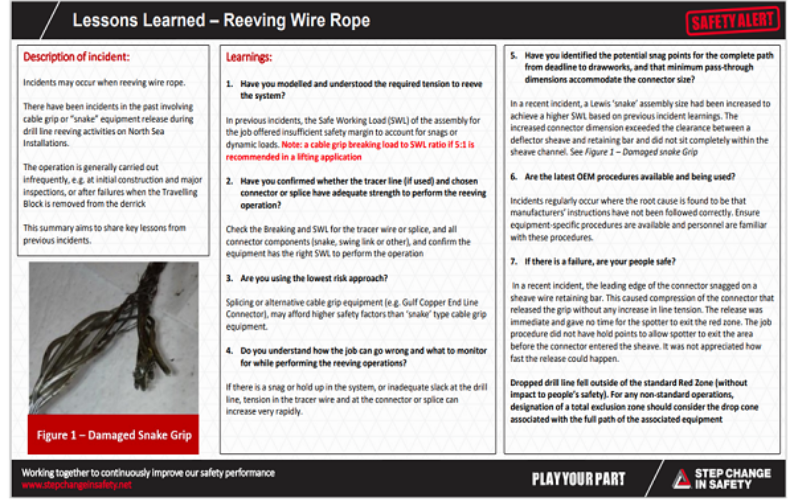